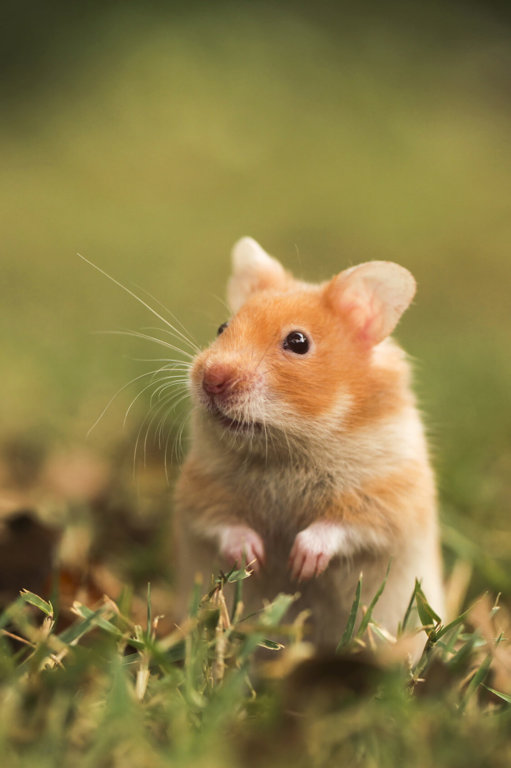 Hamsters were found in Syria in 1839 and have been held captive as “pets” and test subjects since the 1940s. They are believed to have originated in the deserts of east Asia. They inhabit semi-desert regions around the globe where soft ground allows burrowing.
In the wild, these nocturnal animals spend most of their evening digging and foraging for food. During the heat of the day they live in underground burrows, consisting of numerous tunnels and chambers with separate eating and sleeping rooms. They are solitary animals. Some will fight to the death to defend their territory.
Hamsters eat nuts, seeds, fruits, vegetables, berries and grass. They use their large cheek pouches to store food until they return to their underground burrows.
Many hamster species are fast runners, capable of escaping most predators. They can easily retreat into their burrows because the size and shape of their hind feet allow them to run as quickly backwards as forwards.
More than 20 different species of hamster live in the wild. The Russian dwarf hamster is the smallest. The common Syrian hamster is the largest.
Because of their size, hamsters are mis-perceived as being “low maintenance” animal companions. But being solitary animals and nocturnal, bonding with humans can be a challenge. Hamsters often bite and do not make good companion animals for children.
Like all rodents, they can carry rabies and other diseases and, if released into the wild, pose a threat to established ecosystems.
If, after carefully considering these factors, you are sure you want to bring these delicate creatures into your home, avoid pet shops and adopt from a shelter or rescue agency.
Hamsters require proper housing, food, temperature, and exercise and prefer to be alone or with their own kind. A large wire-mesh cage with a solid base works best. More than one hamster in a small space often leads to deadly fighting. Colorful plastic cages may be enticing, but they are difficult to clean, and hamsters may chew their way out.
You’ll need a water bottle, nonwood-based bedding such as straw or shredded white paper, chew toys and an exercise wheel. Wooden ladders and toilet paper rolls also make great toys.
A hamster’s diet should consist of a variety of greens, fruits and seeds, some of which are available in packages formulated for hamsters or birds.
Their teeth never stop growing, so it is imperative that these animals be provided with hard, digestible items to chew.
Do not let hamsters become too cold or they will go into hibernation.
Hamsters live to be between 2 and 4 years old.
NEXT: Gerbils