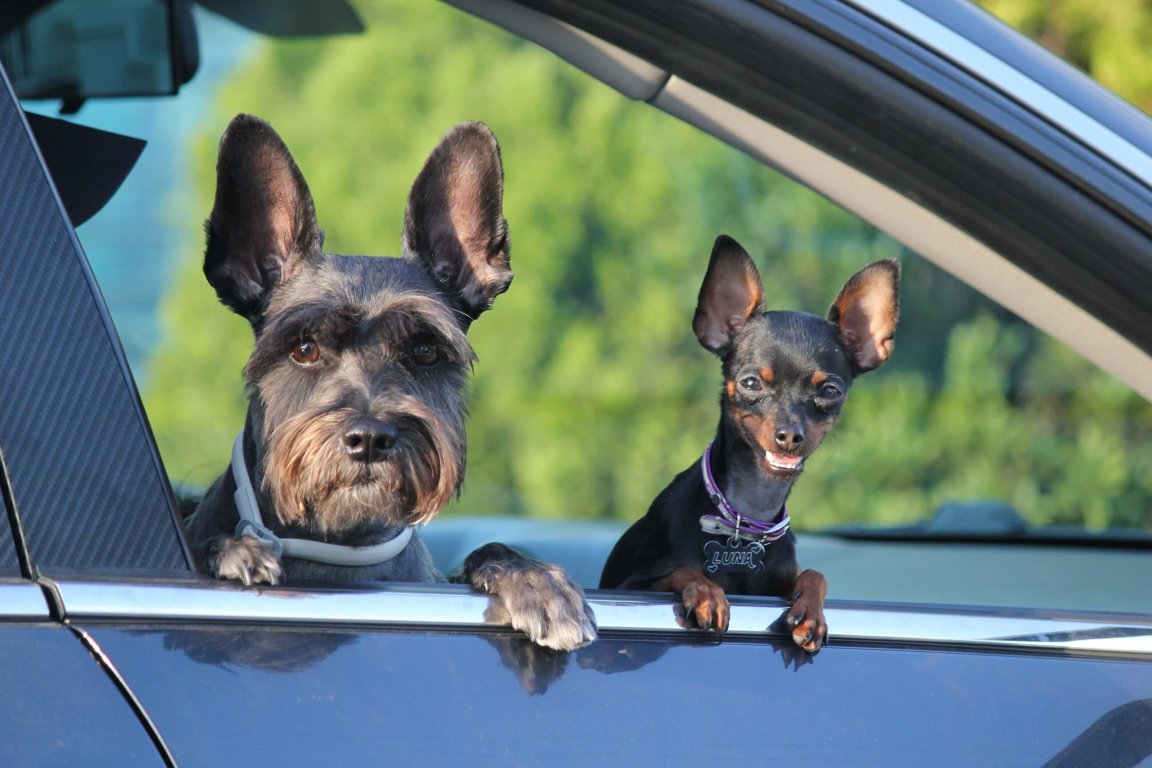 Some people enjoy taking their dogs along on errands, but leave them in the car. This can be deadly. A little heat outside the car can quickly make it very hot inside. On a summer's day of only 85 degrees, for example, even keeping the windows slightly open won't stop the inside temperature from climbing to 102 degrees in 10 minutes, to 120 degrees in 20 minutes. A dog whose body temperature rises to 107-108 degrees will, within a very short time, suffer irreparable brain damage - or even death. Never leave your dog alone in a car, even for a few minutes, in the summer months.
If you see a dog alone in a hot car, write down the car’s model, make, color and license plate number. Attempt to have the animal's guardian paged in the nearest buildings and call the police. Don’t leave the scene until the dog has been rescued.
Heatstroke symptoms to look for are thick saliva, heavy panting, lethargy, restlessness, dark tongue, vomiting, bloody diarrhea, lack of coordination, excessive thirst, lack of appetite, rapid heartbeat and fever.
Provide the dog with drinking water. Spray the dog with water, immerse him in a tub of cool (but not iced) water for a couple of minutes, or apply wet towels to the stomach, chest, paws and groin area. Do not use ice or cold water, and don’t overcool the dog.
If the dog shows any symptoms of heatstroke, get her to a veterinarian immediately.
How To Legally Help Dogs In Hot Cars
What can you do, within your legal rights, if you see an animal in distress in a locked car? The Animal Legal Defense Fund, a legal advocacy organization for animals, has some tips.
If you see an animal in distress, call 911. Most states allow a public safety officer to break into the car and rescue an animal if its life is threatened. Calling 911 is the first step to saving that animal’s life.
Know your state laws. More and more states are adopting “hot car” laws that prohibit leaving a companion animal unattended in a parked vehicle. Although 22 states have some form of “hot car” laws, the laws differ drastically from place to place. Only four states—Wisconsin, Florida, Ohio and Tennessee—have “Good Samaritan” laws that allow any person to break a car window to save an animal.
In 17 states, only public servants such as law enforcement and humane officers can legally break into a car to rescue an animal (Arizona, California. Delaware, Illinois, Maine, Maryland, Minnesota, Nevada, New Hampshire, New York, North Carolina, North Dakota, Oregon, Rhode Island, South Dakota, Vermont, and Washington.) In New Jersey and West Virginia, although it is illegal to confine an animal in a hot car, no one has the authority to break into a vehicle to save the animal, not even law enforcement.
Legislation is pending in California and New York to give any concerned bystander the legal right to help an animal in distress. Pending legislation in Pennsylvania would make it illegal to confine a dog or cat in a vehicle in conditions that would jeopardize its health and would empower a police officer, a volunteer or professional fireman, a humane officer, a security guard, or a first responder to rescue the animal.
Penalties for hot car deaths of companion animals are still limited. Most states limit penalties to misdemeanors or civil fines and infractions, even for repeat offenders. Maine and South Dakota’s laws don’t impose a penalty at all (although an animal guardian in Maine may regain custody of an animal removed from their vehicle only after they pay all charges that accrued for the maintenance, care, medical treatment and impoundment of the animal).
Let people know it’s not okay to leave their animal unattended in a car. When an animal dies in a hot car, most of their humans say they left them “just for a minute.” If you see someone leave their companion animal in a parked car, tell them that even if it’s a pleasant day outside, the temperature inside the car can skyrocket fast. Cracking a window doesn’t eliminate the risk of heatstroke or death.
NEXT: Dog Fighting