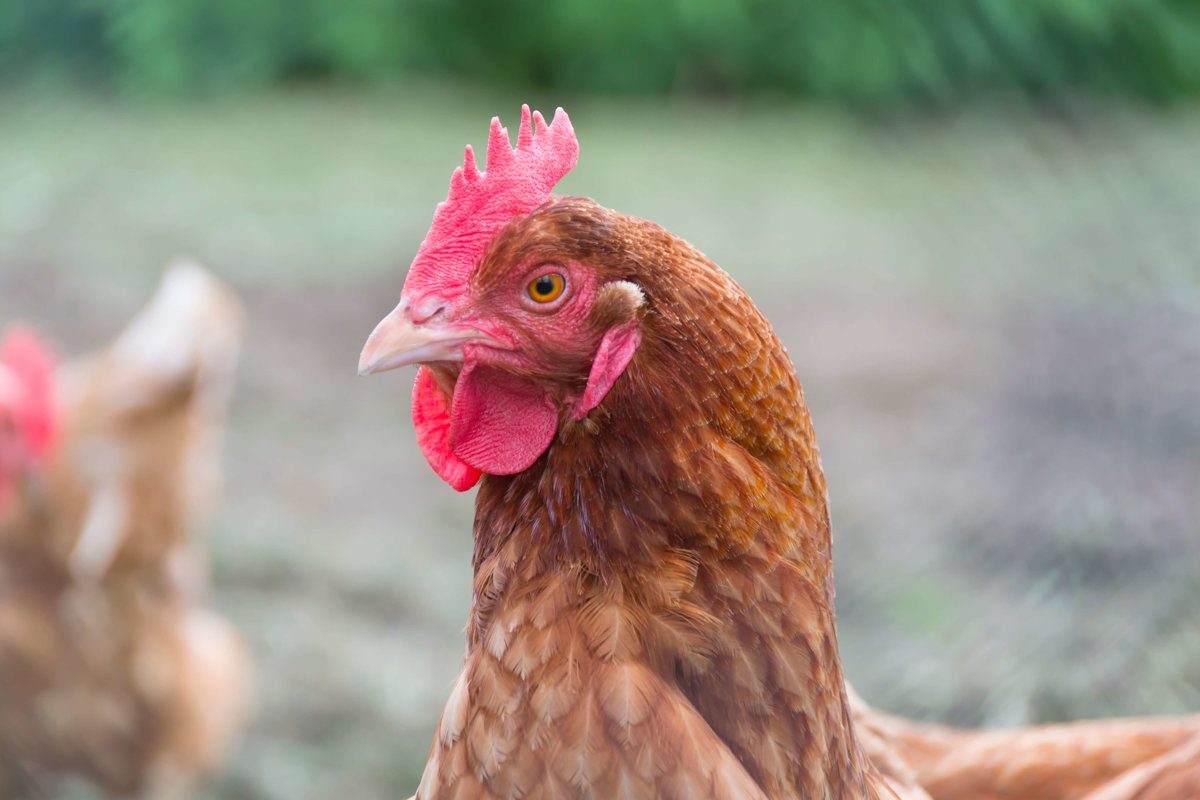 Chickens form strong family ties. A mother hen begins bonding with her chicks before they are even born. She will turn her eggs as many as five times an hour and softly cluck to her unborn chicks, who will chirp back to her and to one another. After they are hatched, the devoted mother dotes over her brood, teaching them what to eat, how to drink, where to roost, and how to avoid enemies. Male chickens (called roosters) are most famous for greeting each sunrise with loud crows, often acting as alarm clocks for farmers.
Chickens are fascinating creatures. They have more bones in their necks than giraffes, yet they have no teeth. They swallow their food whole and use a part of their stomach called the gizzard to grind it up. Chickens actually have many similarities to humans: the majority are right-footed (just as most humans are right-handed), they see a similar color range, and they love to watch television. Many also enjoy classical music, preferring the faster symphonies to the slower ones.
Having a private nest in which to lay eggs is extremely important to hens. The desire is so strong, in fact, that a hen will often go without food and water, if necessary, to use a nest. The nest-building process is fascinating. A hen will first scratch a shallow hole in the ground, then reach out to pick up twigs and leaves, which she drops onto her back. After she has gathered some material, she'll settle back in the hole and let the material fall off around the rim. She will continue to do this until her nest is completed.
As highly social animals, chickens can bond very closely to other animals, including humans. They will fight to protect their family and will mourn when a loved one is lost. When they have bonded with a human, chickens will often jump into his or her lap to get a massage that they enjoy fully with their eyes closed, giving every indication of being in ecstasy.
"It's just a chicken" is a retort heard often when concern for the welfare of chickens is exhibited. This comment reflects just how misunderstood these animals are. Chickens are just as deserving of our respect and compassion as are all other animals.
Chickens can be very sociable. They enjoy sunbathing and, like turkeys, love to dust-bathe in order to keep clean. As with other birds, mother hens’ desire to build a nest for their young is very strong. They have a strong bond with their chicks which begins even before they are hatched, with the chick and hen calling to each other. In the wild ducks and geese spend much of their time swimming and flying and may travel for hundreds of miles during migration. Geese choose one partner who they stay with for life through thick and thin while ducks live and sleep in groups.
On factory farms these birds are taken from their mothers before birth, thus being denied most of their natural types of behavior. No water is provided for ducks and geese to swim in and there is no chance for hens and turkeys to dust-bathe. They are crammed into sheds where the stench of ammonia from their droppings is intense and often leads to respiratory problems. Selective breeding means that these young birds grow very fast. Their bones have no time to become strong enough to hold their weight, so many birds have broken bones and most have lost the ability to fly. An investigation by Compassion in World Farming found crippled birds in chicken farms unable to reach food and drink, carcasses trampled by live chickens and piles of decomposing bodies left to rot.
Birds are commonly hung upside down in shackles by their feet and passed through a bath of electrified water, which should stun them before their throats are slit. The birds are killed at the rate of 8-10,000 per hour and left to bleed to death.
Most laying hens are kept in battery cages with several birds to one cage. The amount of room in which each bird spends her life is roughly the same size as a sheet of paper or a microwave oven. In these conditions hens often fight. To prevent this they are de-beaked by having the tip of their beak sliced off. This is an agonizing procedure which leaves the hen in pain for days. It has been found that hens who have been de-beaked avoid using their beaks except for feeding. Privacy is very important to an egg-laying hen but is utterly denied to her. Her desire to make a nest is also very strong, but again this is simply not possible.
Other alternatives are free-range and barn systems but each creates its own welfare concerns. For example, in free-range and barn systems there is more aggression leading to greater feather-pecking and cannibalism. Just like hens in battery cages, free-range and barn hens are often de-beaked. As in the battery system, half of all chicks are gassed at a day old because they are males and hence no good for egg-laying.