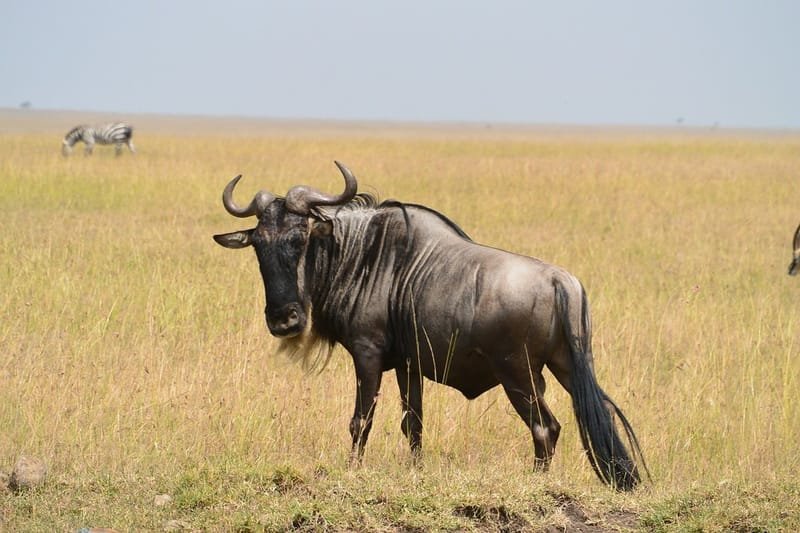 Wildebeests, also known as gnu, are mammals belonging to the family of antelopes that live in central, eastern and southern Africa. Wildebeests prefer habitats of green plains and open woodlands.

One of the largest antelopes, wildebeests can be 8 feet in length, 4.5 feet tall and weigh up to 600 pounds. They have large, box-shaped heads and the front part of their bodies are strongly built while their hindquarters are slender like other antelopes. Wildebeest possess a mane like horses. Both males and females have curved horns.

Wildebeest are grazers, feeding mostly on short grasses. They require water at least every other day. Wildebeests are well known for their seasonal migration, moving towards food and water sources. They travel 500 to 1000 miles, timing their migration by weather conditions. 1.5 million wildebeests, and hundreds of thousands of other animals such as zebras and gazelles, take part in the migration.

During mating season, about 150 wildebeests will form into groups. Within these large groups, smaller groups are also formed. The most dominant males compete within these groups for mating rights to the females. Males also attempt to attract females by rubbing a scent into the ground. They urinate and defecate to mark territory.

Wildebeest pregnancy lasts about 8.5 months. A single baby is born. Birth takes place in the middle of the herd. 80% of wildebeest calves are born within the same 2 to 3 week period prior to the rainy season. Baby wildebeests can walk immediately. Within days after birth they are able to run with the herd. They continue to suckle for about four months, while also eating grass beginning at 10 days old.

Wildebeests can live over 20 years in wild.

Wildebeests are threatened by habitat fragmentation, animal agriculture, the reduction of water sources, and poaching.