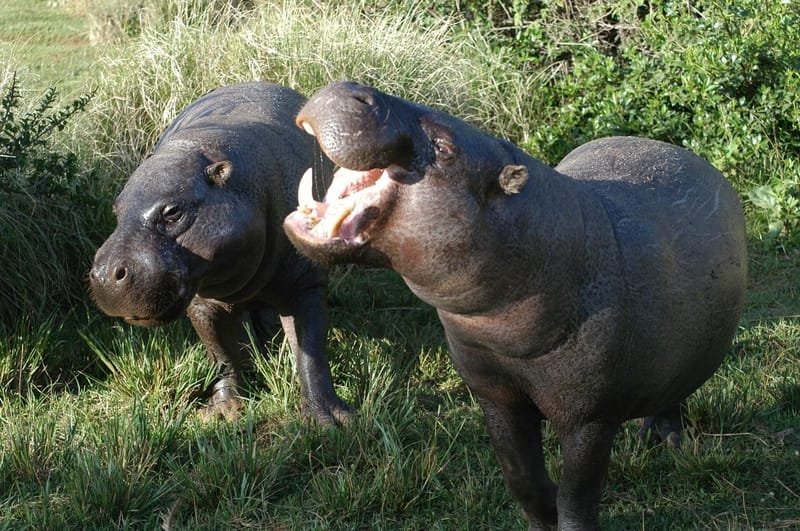 Pygmy hippopotamuses inhabit Cote d'Ivoire and Liberia in western Africa, with small populations in neighboring Guinea and Sierra Leone. The pygmy hippopotamus prefers swampland and dense, lowland tropical forests. They spend most of their time foraging for food and resting on land.

The pygmy hippopotamus has smaller canines, or tusks, than the common hippo. Their bodies are long and barrel-shaped, covered in slate-gray skin that lightens towards the underside. The head of the pygmy hippopotamus is small in relation to the body, and the mouth is narrow.

Pygmy hippopotamuses follow well-trodden trails and established tunnels when foraging, and can run at incredible speeds to escape danger. Spending most of their time on land, pygmy hippos enter the water when threatened. Pygmy hippos are excellent swimmers and have strong muscular valves that close off their ears and nostrils when they are in water.

Pygmy hippos are shy and quiet. They communicate primarily through body language. If alarmed, they release their breath with a loud huff. Signs of submission include lying and urinating while wagging their tails.

Pygmy hippopotamuses cannot sweat and their skin easily dries up. A pink, oily substance is secreted through their skin glands to prevent sunburn. It also has anti-bacterial properties that keeps wounds clean and prevents infections in dirty water.

Pygmy hippopotamuses can be more aggressive during the breeding season. Males will bare their teeth and sometimes fight to win females. Gestation lasts for six to seven months. The mother pygmy hippopotamus gives birth to a single baby in a den or in the water. Pygmy hippopotamus babies are weaned by eight months old. They then join their mothers on foraging trips.

Being large animals, the pygmy hippopotamus has few natural predators. They are sometimes stalked by leopards. Calves are preyed on by large snakes and wildcats when the mother is foraging. Unlike their larger cousins, pygmy hippos prefer to flee from danger rather than fight. They also use lunging, rearing, head shaking and water scooping tactics to scare off predators.

The biggest threat to the pygmy hippopotamus is humans. Despite being protected by law, pygmy hippopotamuses are hunted for their meat and teeth. Their habitats are quickly being destroyed for animal agriculture. Their rivers are now polluted. Logging is illegal in many parts of their natural range, but continues to happen. There are fewer than 3,000 pygmy hippopotamuses left in the wild.

The pygmy hippopotamus is listed as Endangered in its natural environment and is severely at risk of extinction. The sub-species in Niger is Critically Endangered, and may already be extinct.