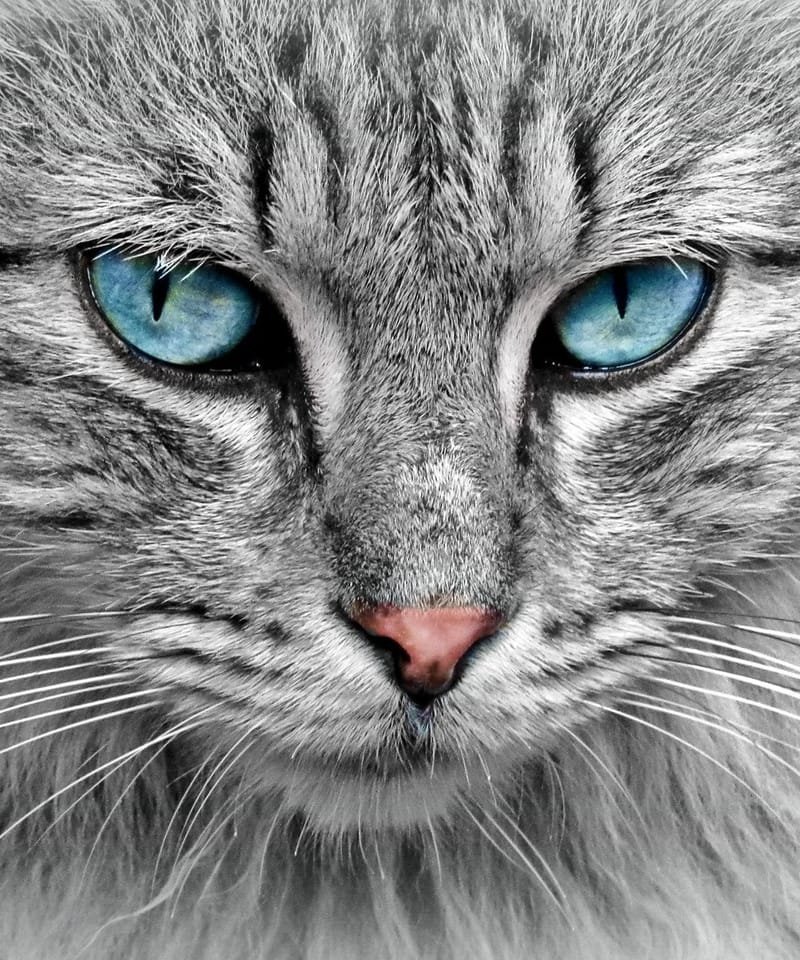 Cats have long been valued by humans for companionship and are the most popular companion animal. There are over 500 million domestic cats throughout the world. Descended from African wildcats, they began to share homes with humans about 10,000 years ago.
Domestic cats are still similar in anatomy to wild cats, with strong, flexible bodies, quick reflexes, sharp retractable claws and teeth adapted to killing small prey. They have excellent hearing, sense of smell and night vision.Cats are felids, which are mammals that include lions, tigers, cougars, jungle cats, wildcats, mountain cats, sand cats and other wild cats. They all share a common ancestor that lived around 6–7 million years ago in Asia.
Domestic cats are not radically different from wildcats, so they can interbreed. Unlike dogs, cats have not undergone major changes during the domestication process. They are still capable of surviving in the wild.
Despite being solitary hunters, cats are social animals and communicate with a variety of vocalizations, as well as cat pheromones and body language. They are known for their love of play. They also engage in play fighting with each other, other species and humans. 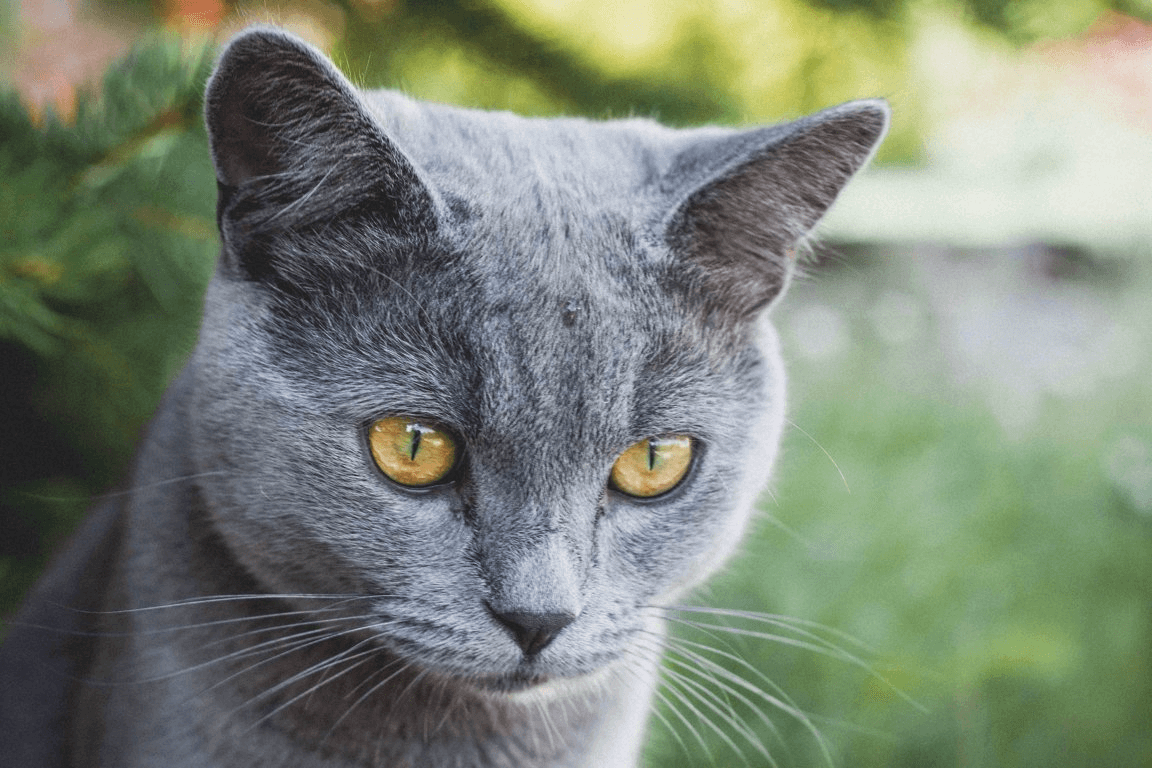 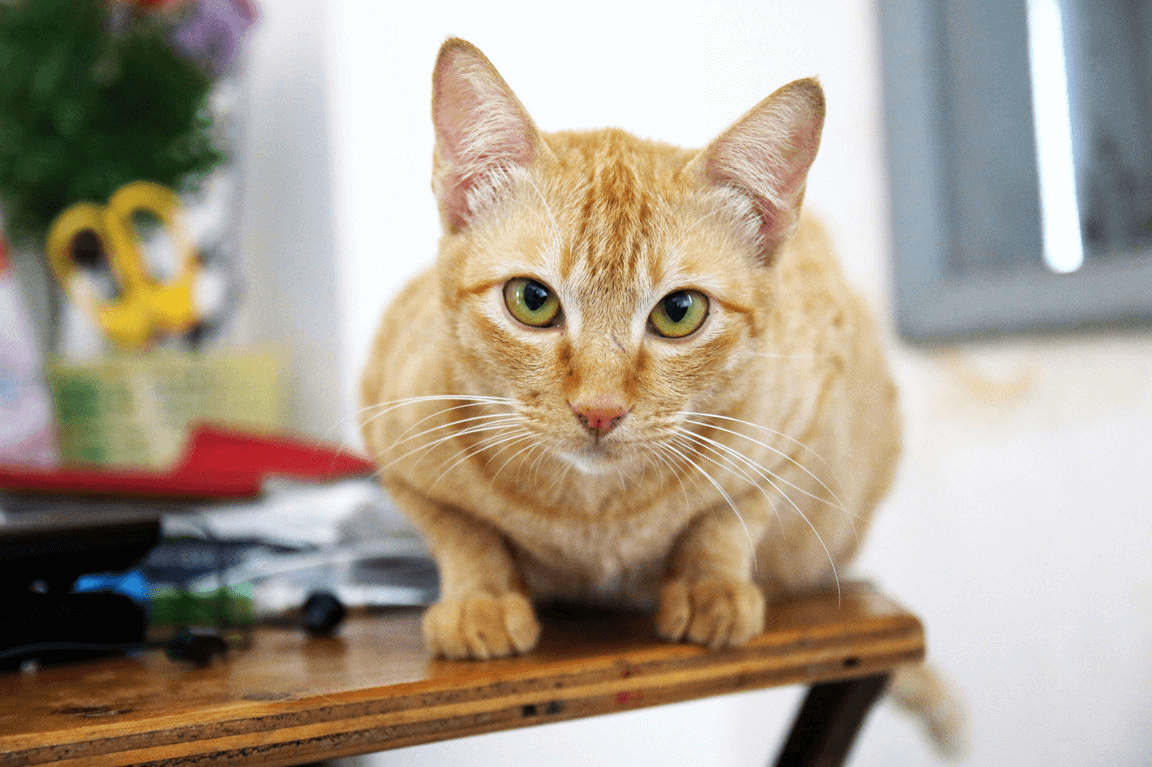 Extra lumbar and thoracic vertebrae account for the cat's spinal mobility and flexibility. Unlike human arms, cat arms are attached to the shoulder by free-floating bones that allow them to fit through any space they can fit their heads. A cat's skull is unusual among mammals, having very large eye sockets and a powerful and specialized jaw. Within the jaw, cats have teeth adapted for killing prey and tearing meat.

Cats, like dogs, walk directly on their toes, with the bones of their feet making up the lower part of their leg. They are capable of walking very precisely by placing each back paw directly in the spot of the corresponding front paw, minimizing noise and tracks. This also provides sure footing when navigating rough terrain. Unlike most mammals, cats move the two legs on one side of the body before the legs on the other side. Camels and giraffes also walk this way. As their walk speeds into a trot, a cat's gait changes to that of most other mammals.

Cats have protractable and retractable front claws. In their normal position, the claws are retracted to keep them sharp by preventing wear. This allows the silent stalking of prey. Cats can voluntarily extend their claws on one or more paws for hunting, climbing, self-defense, kneading or for extra traction on certain surfaces.

Cats are able to tolerate quite high temperatures. They conserve heat by reducing the flow of blood to their skin and lose heat by evaporation through their mouths. They can only sweat a little, with sweat glands located primarily in their paw pads. They pant for heat relief only at very high temperatures. Their kidneys are so efficient they can survive on a diet of meat alone, with no additional water, and can even quench their thirst by drinking seawater.

Cats are carnivores and have difficulty digesting plants. About 20% of a cat's diet needs to be protein. They are dependent on a constant supply of the amino acid arginine and cannot produce taurine. They do eat grass occasionally. Since cats cannot fully close their lips around something to create suction, they lap with their tongues to draw liquid upwards into their mouths. Cats have relatively few taste buds compared to humans and cannot taste sweetness. Their taste buds instead respond to bitter tastes, acids and amino acids. 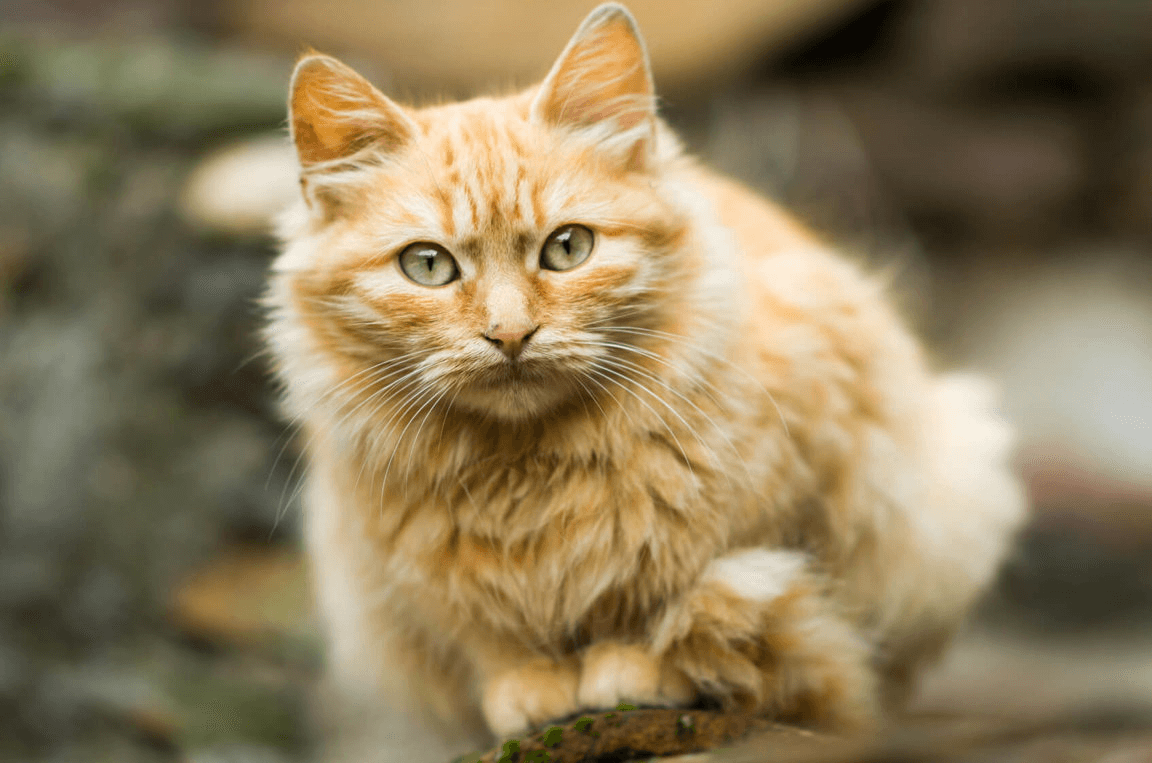 Cats have excellent night vision and can see at only one-sixth the light level humans require to see. Unlike some big wild cats, domestic cats have slit pupils. They see in color, but have limited ability to distinguish between red and green.

Cats have excellent hearing and can detect an extremely broad range of frequencies. They can hear higher-pitched sounds than either dogs or humans. They do not use this ability to hear ultrasound for communication, but it aids in hunting since many rodents make ultrasonic calls. Cat hearing is extremely sensitive and is among the best of any mammal. Their movable ears amplify sounds and help them sense the direction from which the sound is coming.

Cats also have an excellent sense of smell. They are very sensitive to pheromones which they use to communicate through urine spraying and marking with scent glands.

To aid with navigation and sensation, cats have dozens of movable whiskers on their bodies, especially on their faces. Their whiskers are highly sensitive to touch and provide information on the width of gaps and the location of objects in the dark. They work by touching objects directly and by sensing air currents. They also trigger protective blink reflexes to protect the cat's eyes from damage. 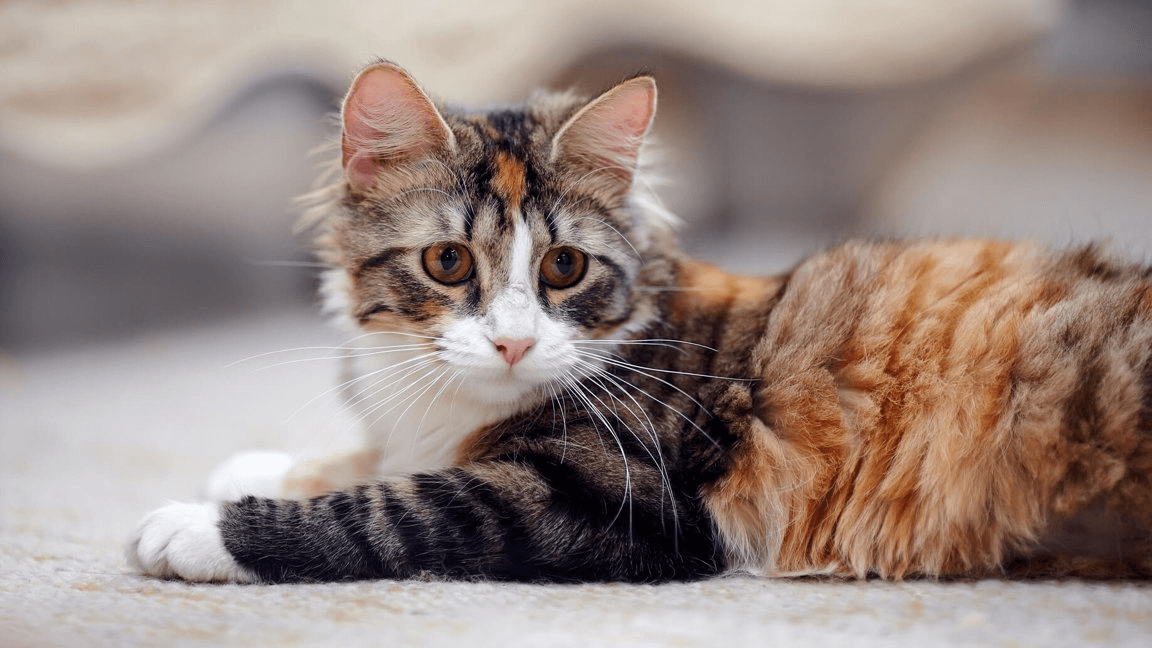 A Day In The Life

Free ranging cats are active both day and night. A house cat's activity is quite flexible and varied, and often synchronizes with their human family. Cats allowed outdoors are known to establish territories from 17 to 69 acres in size.

Cats conserve energy by sleeping more than most animals, usually 13–14 hours per day. They dream often throughout the day.

Cats use many vocalizations for communication including purring, hissing, growling, snarling, trilling, grunting and many forms of meowing. Different body language, including position of ears and tail, relaxation of their body and kneading of paws, indicate their mood. No one knows how a cat purrs. Cats have no unique anatomical feature that is known for causing the sound.

Cats are known for their cleanliness, spending many hours licking their coats. The cat's tongue has backwards-facing spines which act like a hairbrush.

Cats hunt small prey, primarily birds and rodents. They use two hunting strategies, either stalking prey actively, or waiting in ambush until the animal comes close. Many present their prey to their human guardians. Some experts believe this is done because the cat is trying to teach its human to hunt, or is trying to feed their inept human.

Most cats have a fondness for perching in high places. In the wild, a higher place may serve as a concealed location to hunt from and gives the cat a better observation point. During a fall from a high place, a cat can reflexively twist its body and right itself using its acute sense of balance and flexibility.

Among domestic cats, males are more likely to fight than females. Cats arch their backs, raise their fur, turn sideways and hiss to appear more impressive and threatening. Often, the ears are pointed down and back to avoid damage and to listen for any changes behind them. They may also vocalize loudly and bare their teeth to further intimidate their opponent. Fights usually consist of grappling, slapping and biting. Serious damage is rare, as the fights usually don't last long. 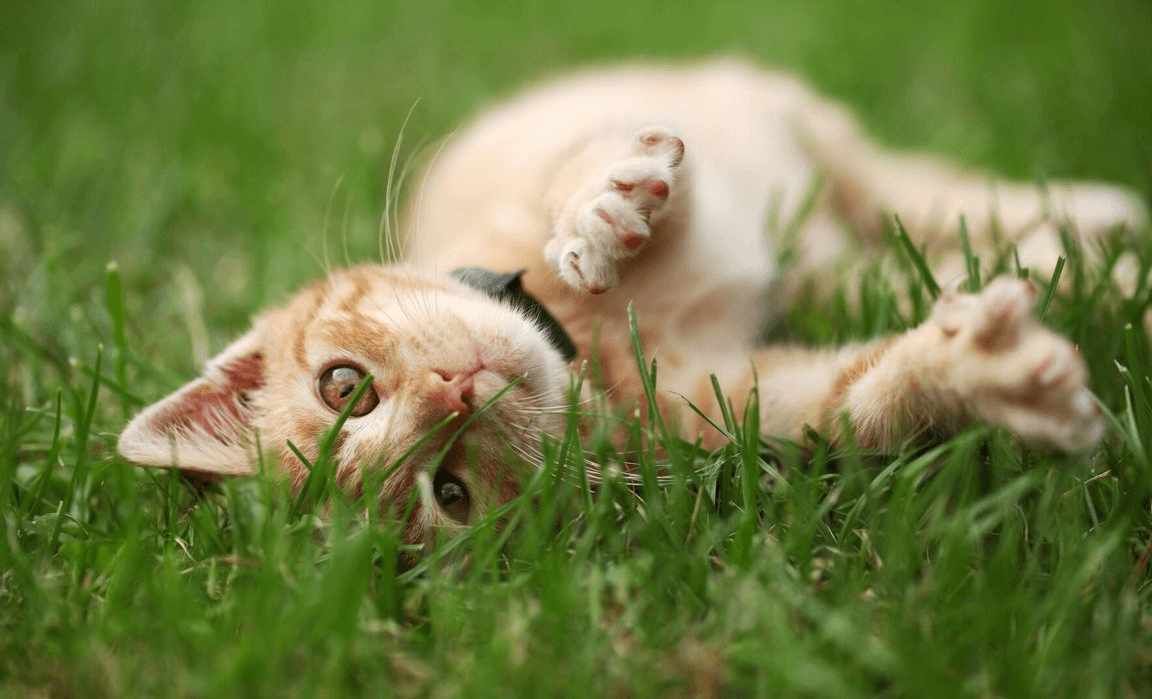 Female cats are seasonally polyestrous, which means they may go into heat over and over during the course of a year. The mating season begins in spring and ends in late autumn. Heat periods occur about every two weeks and last around 4 to 7 days. Multiple males will be attracted to a female in heat. The males will fight over her and the victor wins the right to mate. Cats are superfecund; that is, a female may mate with more than one male when she is in heat, and different kittens in the litter may have different fathers.

The gestation period for cats is about 66 days. The size of a litter is usually three to five kittens. Babies are weaned between six and seven weeks old, and teens normally reach sexual maturity between 5–10 months. Females can have two to three litters per year, so they can produce up to 150 kittens by the time they reach ten years old. They can be spayed or neutered as early as 7 weeks to limit unwanted reproduction. This surgery also prevents undesirable sex-related behavior, such as aggression, marking (spraying urine) in males and yowling (calling) in females. 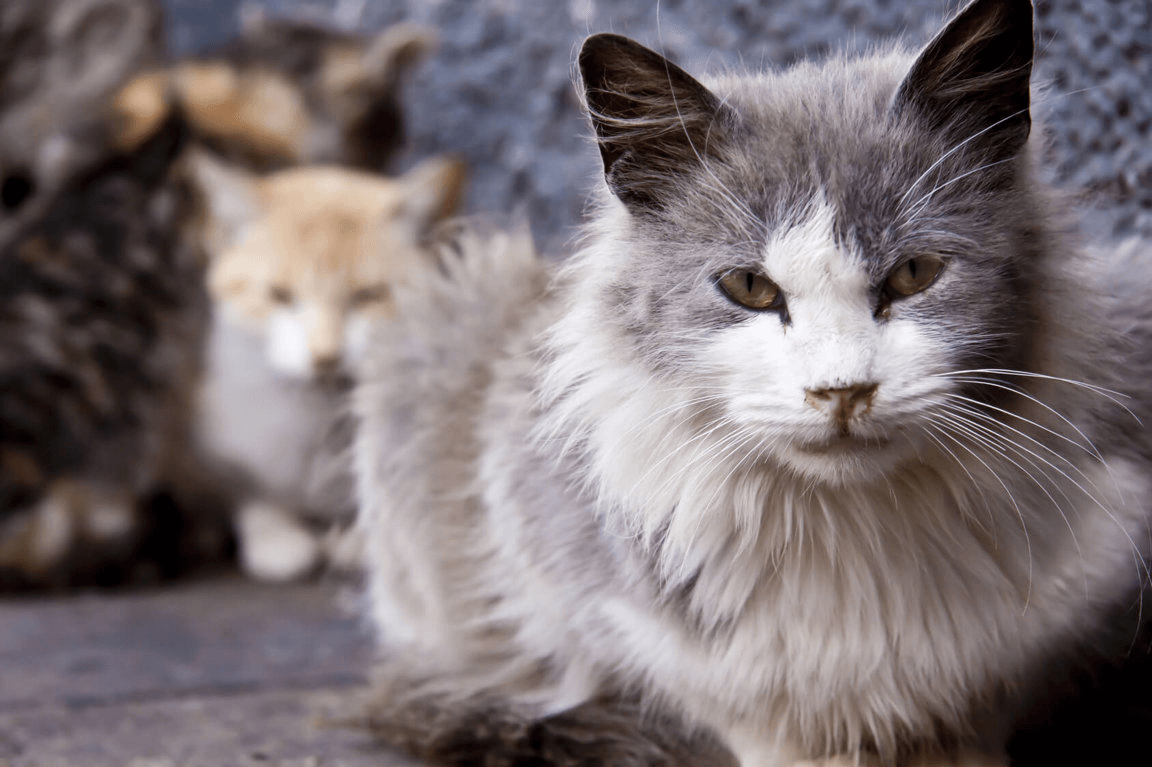 Feral cats are domestic cats that were born in, or have reverted to, a wild state. They are unfamiliar with and wary of humans and roam freely in urban and rural environments. There are 25 to 60 million feral cats just in the United States. They usually live in colonies, occupying a specific territory with a source of food. A grass roots effort to humanely reduce the feral cat population is called 'trap-neuter-return'. Cats are trapped, neutered, immunized and then released. Volunteers continue to feed and care for the cats throughout their lives. An established colony helps to prevent other feral cats from moving into an area.